The future of food is local 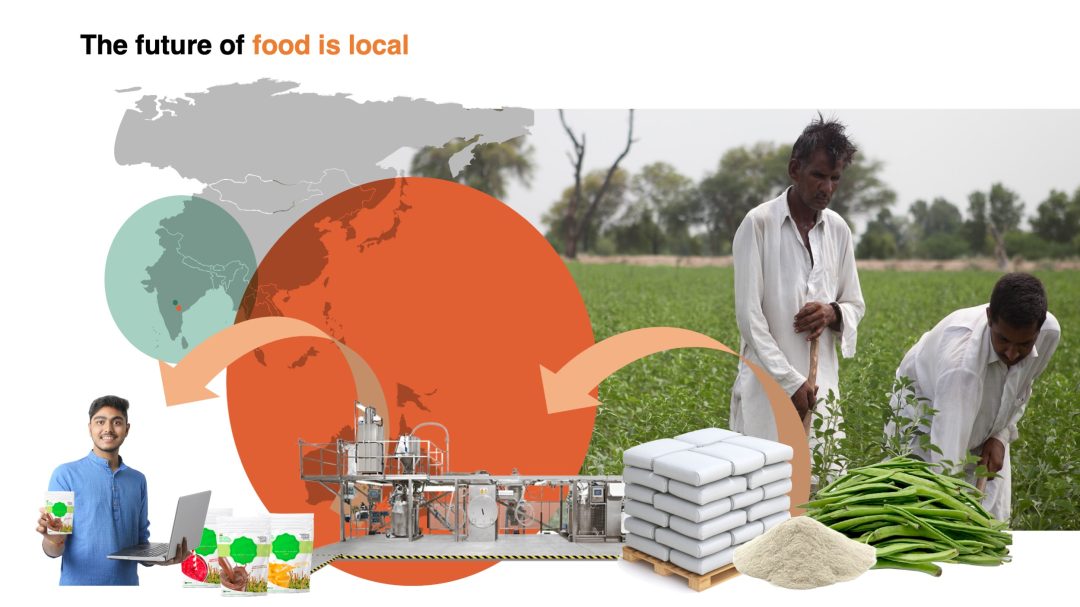 27 Oct The future of food is local

After Covid and with a war going on in Europe, it is becoming clear to everyone that the future of food will become local and operate in digitally accountable global supply chains.

When in February 2004 we inaugurated our “static” factory and production hub in Murcia (Spain) after nearly 36 months of planning and execution amounting to a total investment of about 15 million euros, I fully realized that I had made the biggest mistake of my professional life so far.

Bringing the ingredients needed for our food solutions from around the world to Spain and then exporting to other countries and continents made it clear to my team and me that this was not sustainable.

This was something I had thought a lot about since 1986 in my first job in the food industry where my company brought dried raw materials from very far away to a production plant in Denmark, something seen as an industry standard based on the idea of operating big factories with an economy at scale and long pay back.

But from that moment on, I understood that I had to go for what I believed in because it was obvious to me that this food system was unviable and would not be able to stand forever.

In 2004 we were manufacturing a blend of different food ingredients with a major ingredient being guar gum that we imported directly from India or bought from local Spanish distributors before blending with other ingredients, packaging the final recipe, and doing exhaustive QA/QC before selling it afterward outside Spain.

And I thought: why not invent a production unit which we could bring closer to the origin of raw materials and to our customers?

I challenged my engineers to invent and design a prototype, easy to transport and install anywhere in the world, and in case of change in business opportunities we would be able to remove and set up in a new location becoming the core of a novel Blendhub global replication model. This is how we invented and patented in 2010 the Portable Powder Blending unit (PPB), a portable factory that can be transported in a 40-foot container and be operational anywhere in the world in less than six months. In 2011 we inaugurated our first production hub in India, we moved our food solution using guar gum to India and the result was a price 30% lower compared to production in Spain with exactly the same quality and functionality, food safety, and security.

Today more than a decade later, we have deployed 7 hubs on 4 continents and now expanding in close collaboration with food industry partnerships and investors interested in adding their location to the world map of this proven platform business model. This is how we became pioneers in taking localized food production from idea to reality and today accelerating a global network of multi-localized hubs.

Last week I was positively surprised to read that American company Relocalize has raised funding of 1.4 million dollars to install a series of portable food production factories in different parts of the USA to be more efficient and reduce emissions.

The future of food is local, says Relocalize CEO Wayne McIntyre. Indeed, at Blendhub we were visionaries more than 10 years ago when we launched our model, and we are excited that other industry stakeholders are joining the model. Because changing the global food system requires efficient alternatives and with our and other companies’ solutions, we have demonstrated how a reduction in handling and transportation is not only reducing final food prices but is also directly impacting CO2 emissions. And this can be expanded further because by empowering local communities to use their locally available ingredients, more diversified crops, and even implementing regenerative agriculture this positive impact can grow exponentially.

And as many might remember, over a year ago the global food conglomerate Unilever also announced that it had developed a so-called travel factory to produce more efficiently and sustainably anywhere in the world.

Welcome, Relocalize, Unilever, and all those who want to join the localization movement because the tipping point is near.  And only through the collaboration of all stakeholders in the agrifood value chain, we can ensure the supply of healthy and affordable food and nutrition in sustainable global supply chains to all people in all places.